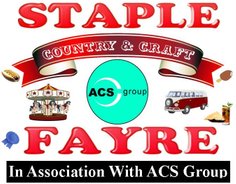 Over  the past seven years or so, Staple's Country & Craft Fayres have grown so large and complex that both the Fayre Committee and the 'non-committee', working together would still be unable to manage!

These hard-working individuals carry out the majority of the physical hard work involved in the setting up and packing away of the Fayre; as well as acting as marshalls, traffic managers, gofers - - -  in fact anything and everything that's needed.

We were extremely fortunate - because the

to be absolutely brilliant!  It's no

exaggeration to say that without them, the

Fayres simply could not  have been been

As our Fayres grew even bigger, we used

Sadly, Wingham are no longer able to help - so for the 2018 and 2019 Fayres, the Broadstairs Explorers did ALL of the work!

And it's no exaggeration to say that the Fayre simply couldn't have gone ahead without them!  - They worked tirelessly for the entire weekend - and they were magnificent!

They will once again be the sole Ground Crew for our Fayre. - This time, on Sunday 26th June 2022.